Asinvari may be another word for Eden. The tropic sun glazes the palm trees, the sky a penetrating blue. Gin clear water ripples turquoise/aquamarine spotted with dark purple, embraced by a perfect crescent of beach. Lazing on the deck, I can see clumps of coral 35 feet below and hear the sound of a waterfall’s ceaseless rushing, hidden behind a cluster of three trees on the shore. Yesterday I took the dinghy to the beach and tied it to a tree while I tried to do some drawings. I seem to have lost the knack entirely but it was still fun rocking back and forth in the shade, scribbling on my little pad. Then I walked up to the falls and sat on a rock under the falling water as it gushed over my body. Through the palm branches I could see Ithaca rocking on her anchor.

We were half way around  the world from home, on what was to become a 14-year circumnavigation on our 38ft sailboat Ithaca. Anchored off this small village, on the island of  Maewo in the Pacific Island country of Vanuatu, it did indeed feel like paradise. Maewo, the wettest island in Vanuatu’s mountainous north, is veined with fast-running rivers, permanent springs, and abundant waterfalls. Lush gardens entwine the thatched huts of tiny villages. The people are light skinned, more influenced by their Polynesian heritage, and the culture is rooted in ancient rituals where “magic” is not just about doing tricks. Witch doctors wield real power.

When we took the dinghy to the beach to pay a visit to Chief Nelson at the newly rebuilt “yacht club” hangout—quite grand by ordinary island standards—he introduced us to a small teenage girl who was hiding behind him. “My granddaughter, Nani. We lost her father last year.” A nest of black, curly hair hide her face as she held his hand and stood looking at her feet.  “She’ll be your guide.” Then she looked up, smiled, and the sun came out. Limping slightly, Nani showed us around the well-organized village, pointing out the houses of all her relatives. Colorful plants lined neat paths through rock-lined flower beds and attentively weeded vegetable gardens. Then the path circled around the school, across the football field to the ocean side of the island, and back again to the yacht club.

Along the way we passed the grave of the chief’s oldest son who died the year before. A faded photo of a middle-aged man stared out at the hillside of coconut trees and jungle bush under a crudely lettered memorial. “Beloved Son, husband and Daddy.” Nani stood silently next to us. We didn’t ask.

A gentle waterfall spilled down a broad expanse of rock face in several different sections, falling into a green pool created by a ledge of rocks piled between it and its route to the bay. We stood on the ledge absorbing the cool mist on our hot sticky faces, soothed by the endless cascade, then returned to the yacht club for ice-cold beers and conversation with our new friends. Here we met Chief Nelson’s youngest son, Nixon, who was practicing with his string band group, a charmer with a ready smile, bright eyes, and two dreadlocks coming out of the top of his head like little horns.

The next day (my husband) Michael, in a playful mood, performed his “eat your thumb” magic trick for a little boy who came by the boat in his canoe. Word spread that the man with the white beard did “magic,” which is taken very seriously in this part of the world. Later, on the beach he did a few more little tricks and had a whole gallery of kids begging for more as we rowed back to the boat. That night we went to the yacht club to hear Nixon’s string band and partake of a special coconut crab dinner. After dinner the children begged for more magic, so Michael pulled a coin out of a little girl’s ear as they clustered around him whispering in wonderment. Then a young man from the string band asked him if he would come to the school so all the kids could see his magic.

When we got back to the boat that night, Michael searched for whatever props he could use to “make magic,” not having access to his basement trunk full of secret boxes, top hats, and hidden rabbits. “I think a handkerchief, a shoelace, a bit of string, a table knife, and a teaspoon might do it,” he muttered to himself as he pulled out the galley drawer. “I need to practice. It’s been such a long time since I’ve done some of these tricks.” Bending my mother’s silver spoons used to be our boys’ favorite, mainly to watch the agony on her face. Michael practiced grimacingand pretending to put all his strength into bending a galley spoon then whipped it out straight. I giggled until I was blue.

On “Performance Day,” Nixon escorted us to the school, playing his small, long-neck banjo-like instrument that he was never without. He introduced us to his brother, who taught at the school and was in charge of organizing the children from little first graders to eighth graders. Michael stood in a doorway under the eaves of the porch in front of a low table as the kids crowded around him. It was hard to know how they responded because they didn’t make a sound, just looked wide-eyed at each other after each trick. The jewel rope trick was first and may have been a little wordy for them, but the knife-swallowing and coin tricks were clearly the favorite, as was the thumb-eating trick everyone loves because Michael is so funny when he does it, bug-eyed like a Maori warrior. In the middle of the “disappearing knot in your shoelace” trick, he looked around and suddenly realized the premise of the trick was lost on them since no one wore shoes. But he told it in such a funny way that they couldn’t help but grin.

Later that day he was summoned by Chief Nelson to do the whole routine over again. The wily chief was perplexed by the knife-swallowing trick but even more mystified by the magic spots trick. So, Michael said he would show it to him and leave him the card if he promised never to tell anyone. Several hours later the chief paddled out to the boat with some papayas and Michael showed him how to do the trick but, having started early on the kava that afternoon, he never quite mastered it—much to his embarrassment. Michael graciously assured him that it took years of practice.

On our last day in Asinvari we walked through the little village and followed a new track, which led up a hill to another very pretty village with a tiny church next to an immense banyan tree called “the Chief.” Suddenly a large group of kids popped out from behind the tree yelling “Magic. Magic.” It seems Michael had become the rock star of the island.

Back on the beach, we found Nani in a small grass hut selling baskets, fruits, and vegetables. We bought a kumara and some eggs then traded a pen, notebook, and T-shirt for a small woven basket and a bag of delicious cherry tomatoes. Still shy but sweetly vivacious, she shook our hands, as is the custom here, and, when we confessed we were leaving that day, she pouted slightly and said, “Oh, but I’ll never see you again” as if we were her best friends.

She stood on the beach waving as we pulled away over the black sand and turquoise water. I waved back and smiled, deeply regretting that we would, indeed, never see each other again. 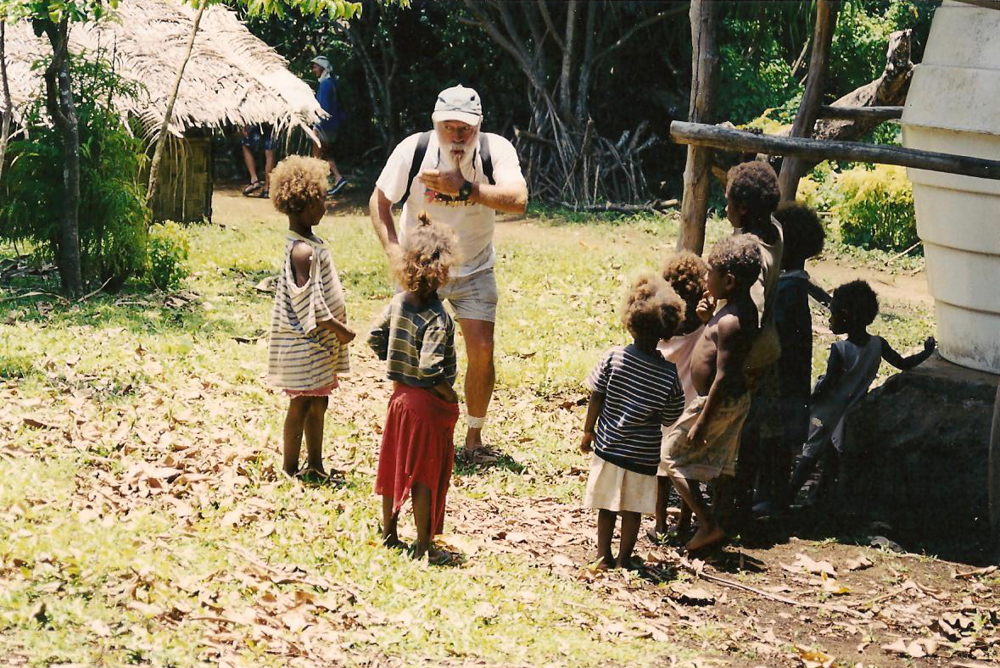 From the travel/memoir Waterborne—A Slow Trip Around A  Small Planet.

published by Seaworthy Publications in September 2019

BIO: Marguerite Welch is a writer whose personal essays, travel pieces and flash fiction have appeared in Bay Weekly, Wanderlust and Memoir Magazine. Her travel/ memoir, Waterborne—A Slow Trip Around a Small Planet, documenting a 14-year world circumnavigation will be published by Seaworthy Publications in September 2019. Magic in Eden is an excerpt from that book.

If you have your own travel stories and photos that you’d like to share with our global audience, please see our guidelines here: