The tram from Geneva winds slowly with the contour of Carouge’s terraced tenements, into a sweeping bend. The tram alights in a place more like a quaint village than a city canton, where urban living once bore the pace of the horse and cart, arduously stomping across its raised cobblestones.

Street-level facades support the distinctive wide archways to doorways and shuttered window displays of various offerings. A candy store so obscure, that its addictive cravings could drive you crazy trying to find it again.

Smoke‑filled Cafe Des Sports laments its wine-loving diners, as the flash of a chef’s blade slices sunlight through an open window. Opposite, a boutique, specializes in crafting clothes, hats and handbags. Alongside, sits the open door of Tebac E’picerie, the aroma of cigar smoke drifting into the street like a welcome mat for the passionately inclined.

Painstakingly renovated and protected as a Swiss national treasure, this small ancient district is separated from Geneva’s metropolis by the milky-blue Arve River. Carouge originating from the 18th century when the King of Sardinia commissioned Turinian architects to develop the land-locked area in a distinct Piemontese style, savouring that flavour of the Mediterranean.

Local folklore also tells of times in the 1800s when Carouge became Geneva’s nemesis, offering refuge to smugglers and gold prospectors of the Arve River with the chance to frolic, without shame in the numerous cabarets. Carouge, also tempting the disreputable elements of old Geneva to escape puritanical browbeating. Hence, a certain rivalry prevailed between them.

The canton perimeter curves just enough to perk curiosity to emerging secrets, where narrow alleyways intersect cross streets, leading to the spacious plazas of Place due Marche, Place due Temple and Place due Charmettes. The fountains and symmetry of shaded plane trees’ dominating, like overflowing flower baskets to shield the southern fringe, towards the Saleve. The mountain dwarfing Carouge and Geneva, sparkling like jewels, set in the palm of its massif.

Carouge Temple dominates Place due Marche’s west side. Its twin columns shying observation behind full‑bloom plane trees, formed in perfect arches, as they reach out like umbrellas around its middle. Forested abundance softening the sprawl of sculptured stone amid the laid-back atmosphere of people watchers. A twentyish couple sits close together at an outside café table, he lovingly cradles her, as if she might suddenly dissolve his dreams. They don’t speak, or kiss, only look into each other’s eyes, searching, unfaltering, oblivious to their surroundings.

Across the plaza, the front window of a patisseriedraws onlookers to baked muffins, crusty French bread and croissants to tempt sensitive noses. Within a few strides, an antique store appears with gold-leaf mirror and picture frames, and a feast of treasures with barely enough room to step around them. Such trade scatterings lend celebrated credence to this illogical maze, amongst the renovated apartments.

The ancient street roof lines defy convention, many buildings differing in height, when newcomers from the same era built different houses, then joined them together. Window sills at floor level with the distinct Piemontese arches framing the lintel over the top, and doorways with large blue and white number plates. Houses grouped like intimate little friends make it easy to visualize neighbours spilling into everyone else’s house on special occasions. The top level of the four-story tenements jutting out of the roof as an extension of the window boxes. Windows, the same size as the doors where function and reason are offered for every aspect of the design, down to the little rocker catches holding open shutters rigidly to the wall.

Restaurants, where you can order cordon bleu, filets de perche and pommes frites. Steak tartare, if you’re brazen enough in this bloc de Francais. Other choices of rigatoni, tortellini aux morilles, Vietnamese curryand a whole rash of other international fare to entice the palette. Washed down with local Swiss and neighbouring wines. The spices of Carouge, as rich and diverse as a restaurant’s wrought-iron fenced balconies and Mediterranean shutters. The chatter of diners’ and brasserie beer thirst-quenchers drifts into the street, temporarily disturbed by thesymphony of carillon bells. The echo of footsteps on stone, applauding the polished sheen of window glass as it presents a ginger cat stretching out its paws for yawned attention.

I circle back to Place due Marche, watch an elderly lady lean towards the bronze swans trickling water under a stone-tiered fountain. Her smile uniting an ancient past, intoxicated with the aroma of azaleas, gladioli and blossoming rhododendrons, overwhelming the senses to the splendour of Carouge’s ramparts. As if to complete her memory, an apartment resident above a boutique shares the music of Pavarotti, harmoniously drifting into the plaza.

There’s nothing predictable in this assortment of commercial and residential belonging. A corridor leads to a curved 18th-century staircase where a woman opens the shutters to her second-floor window of an ancient apartment house, seemingly mesmerized by all the passers-by.

I mosey on with fascination, as the prominence of bells clangs ceremoniously towards Rue Jacques Dalphin. Cafe Des Amis. Rue Anncience. Then suddenly approach the fringe of Carouge at Place Du Rondeau alongside Restaurant Au Baccalino, hosting a loquacious buzz. Enlightened by Carouge’s history, its subtle variations that portray the intimacy of daily living, and its most distinct shared heartbeat of a bygone age, I follow the tram line back to the terminus.

Many years later, Carouge has evolved into a fashionable hub, albeit with its wonderfully renovated Piemontese characteristics intact, and I savour the opportunity to experience more glimpses of its memorable riches. And perhaps, the chance to search out that obscure candy store again. 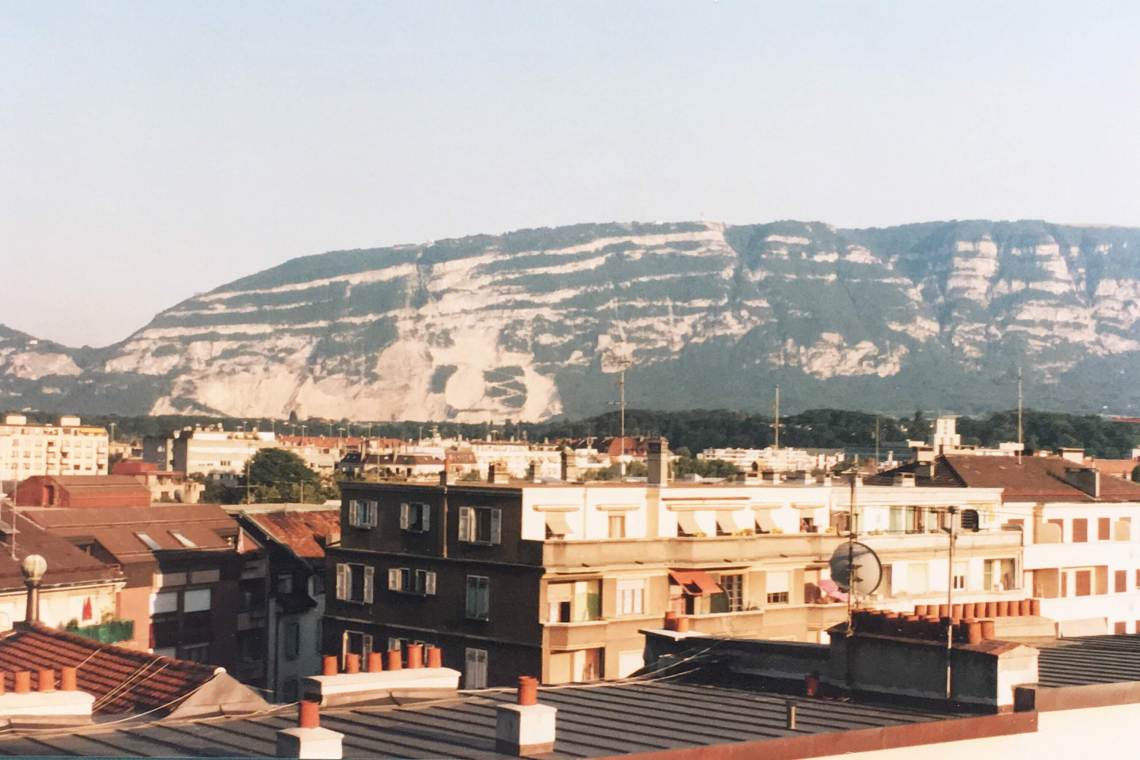 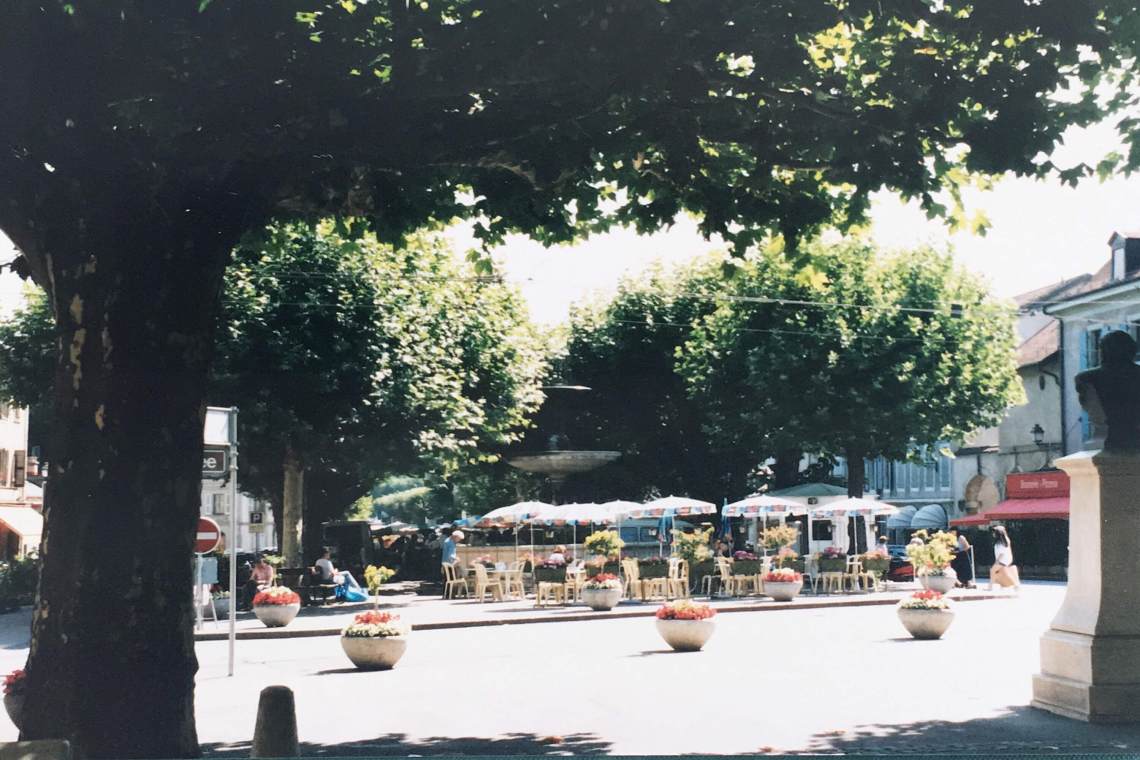 BIO: John’s work and other adventures have taken him to many different parts of the world, where human volatility and disregard for the planet’s environmental health are at risk. His travel stories have appeared in Wanderlust, Our Canada Magazine and The Vancouver Sun.

If you have your own travel blog and photos to share on this international platform, please submit to us.