The municipal fish markets of the Ebro Delta are the nerve centres, social hubs where the town’s people congregate to trade gossip and exchange recipes. They are  made up of a series of permanent fish counters with traditional Catalan names like “Jordi,” “Ramon,” and “Neus.” The counters represent the legacy of family fishing dynasties dating back to 1930, providing the surrounding towns and villages with seafood so fresh that shellfish escape attempts are a regular occurrence, and not always unsuccessful.

The Ebro Delta heartland is an expanse of rice fields and olive and citrus groves, irrigated by a network of canals and ditches. The area, known for its diversity of marine ecosystems was declared a Biosphere Reserve by UNESCO IN 2013.

Sant Carles de la Rápita, named after King Charles the 3rd of Spain is the largest fishing town on the Ebro Delta that sits on the naturally sheltered, sustainable fishing ground; Alfacs bay. During the low tourists season, the town lulls into limbo, populated solely by families that sustain the thriving local fishing industry and run the local fish market.

The market is the central point of town a blue painted concrete and steel hanger that groans wearily in the morning sunshine like a sleeping giant, slowly awakening.

The preceding hours leading up to lunch are peak time at the market, the buyers jostle for space, each trying to get an eye on the seafood streaming in from the port. Some of the bounty comes straight from the central fish auction where restauranteurs and local supermarkets have already picked over the choice catch. Some of it comes from the small boats; independent fishers who haul directly out of Alfacs bay, and some, from free divers that swim around the shorelines, prodding about under rocks for hours on end, in the hope of finding a few Octopi that they can sell on to stallholders. The freedivers are the direct result of a locally sourced and fully licensed hand fishing industry, providing seafood to the local population, destined to be grilled, fried, boiled or smoked. They arm themselves with spear guns, tridents, and a floating net for depositing catches that bob on the surface next to them like an infant’s inflatable rubber ring. Sometimes you see them amongst the rocks, black neoprene figures tenderising Octopi with brutal overarm force.

The fishmongers decorate the countertops with citrus fruit to cut through the odour of brine and fish blood; The sharp perfume of lemons drifts by, just enough to mask the fish guts. It is a nasal adventure, a half-hearted attempt at conjuring up images of the Mediterranean Orange and Lemon groves that dot the coastline. The scent contradicts the metallic musk of rust from the weather-beaten beams that run the length of the market, and the linseed oil varnish from the wood of the boats that seesaw up and down just outside in the dock.

The seafood counters are so popular that they need ticket machines; ancient chrome flap displays that flip over to the next number like a vintage airport departures board that buzz fiercely to make sure everyone´s paying attention.

I pull a stub from the red plastic ticket dispenser; number 155. I have some time to leisurely mull over the selection of seafood on display, but with the choice oysters, prawns, crabs, langoustines, squid, octopus and five different types of clams and a tank full of brawling lobsters. It’s easy to get distracted.

The local fishmongers are, by nature, stern and intimidating types with little patience for hesitation. Pre-lunch shopping is frantic, and indecisiveness and procrastination are frowned upon. However, in the face of overwhelming variety, the need to choose concisely only adds a layer of anxiety to the already perplexing situation; ordering seafood by weight is an exact science, and there is a pressing need to be ready to order when the display flips over and buzzes your number. As I glance over the selection of roaming countertop seafood, something peculiar catches my eye. Several crustaceans are making a bid for freedom. Leading the attempt is a small and agile langoustine with a black stripe across its head; it appears to be the leader of the escape attempt and shows the determination to be so, a few others follow behind, visibly weak but strong in resolve. The fishmonger is too busy frantically grabbing and weighing handfuls of shore calamari to notice. 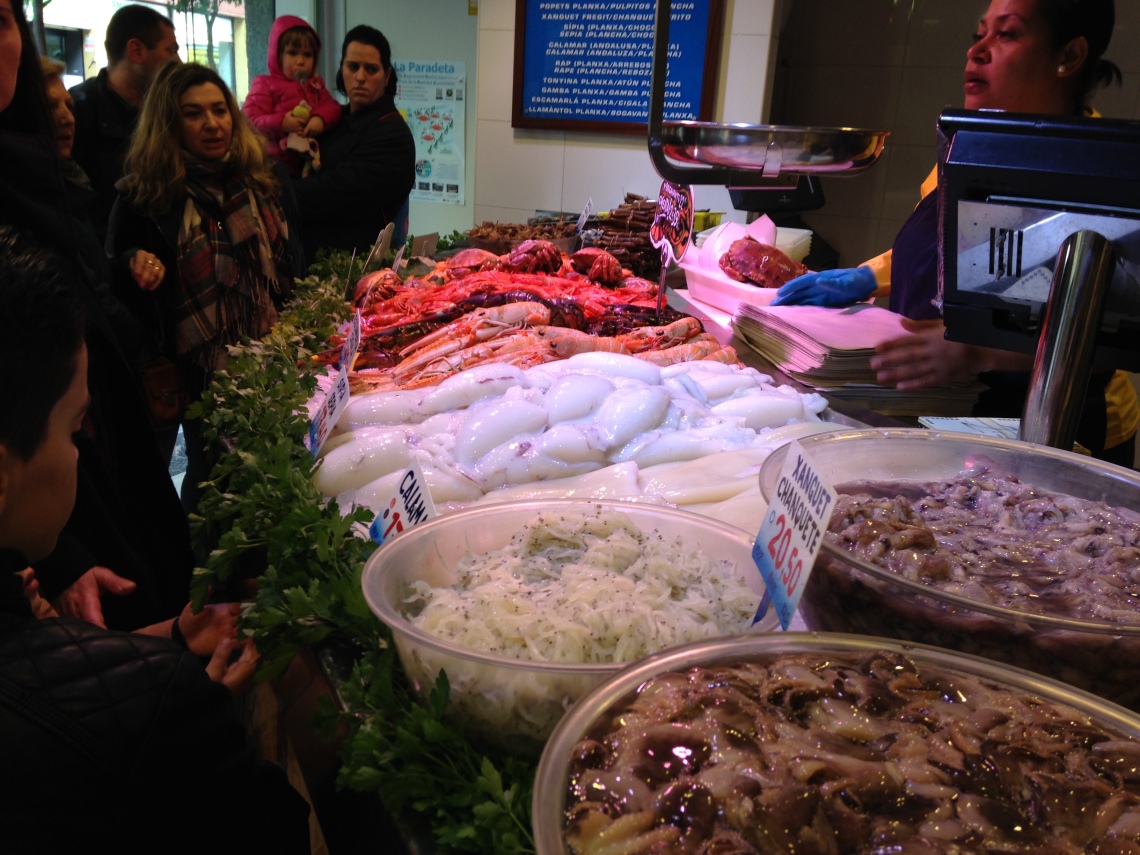 The flap display flips over and buzzes.

The langoustine leader crawls cautiously towards the edge of the countertop and then flips over the lip and hits the floor upright on its claws like a cat. The escape attempt seems almost seems pre-planned and rehearsed, a surreal sight indeed in the middle of a crowded market.

The next customer pushes through the crowd to address the fishmonger. The langoustine leader looks impatient; the escape team have lost focus, one of the Langoustines squares off against a lobster twice its size, they pivot like boxers in a ring. Other langoustines are unsure how to negotiate the lip and scurry sideways when they reach the edge. The leader takes advantage of the distraction and tenaciously scuttles off towards the docks. The glimmering sea within sight. A passing fisherman swoops down and picks the leader up between his forefinger and thumb and lobs the Langoustine back onto the ice pile. It flicks its tail and rights itself, unfazed, and heads back towards the lip of the counter.

The ticket machine jolts my attention back to the task. As I scan the seafood, I find myself staring at a cast of Spider crabs dancing gracefully across a custom-built aquarium. They pivot like ballet dancers oblivious to their encroaching fate; the pot and the boil, tinny Spanish pop music blasts from defective speakers on the market walls providing the soundtrack for their last dance before becoming somebody´s starter.

An Octopus sitting on a ridge of ice chips eyes the crowd, it stares directly at me. Its tentacles carefully prod at the humid, sultry air, wearily observing us, the crowd peers back, hungrily deciding its fate. Clams open their shells just enough to release jets of water on to the stone floor as if synced to the music. “Vamos a bailar,” the distorted voices sing, “esta vida nueva.” All the while, langoustines continue to roam the counter looking for a way out.

The leader takes the plunge while the others are distracted and brawling with each other. A blue crab, too large to go unnoticed falls off the countertop, and lands hard, a sharp crack echoes around the market. The crab, unsure of what do scuttles erratically across the floor. A curious Jack Russell bounds over to investigate the fugitive, barking and growling at the strange blue sea life scampering across the floor, the crab comes full circle and tucks itself into a corner of the market behind a crate, snapping at the Jack Russell with its pincers. The langoustine leader uses to the moment to make a break for the door, its feelers anxiously prod at the air, and its claws held out in front like a forklift truck carrying its determination, it scuttles out the market towards the docks. Nobody notices its departure.

The ticket machine flips over and buzzes.

My ticket number is now on the screen.

The fishmonger cocks her head to the side and lets out a snort of impatience to spur me into action. A wave of anxiety hits me, with all the distractions, I have neglected to make a choice. The people in line behind me begin to fidget restlessly and audibly tut in frustration. I attempt to recall one of the several Catalan words for tiger prawns. I take the plunge and ask for “Gambes.”  The fishmonger´s jaw juts forward, and she flicks her tongue against the roof of her mouth, all conversations halt, and the people in line crane their necks to hear me speak. It must be a strange sight to see a foreigner attempting to speak Catalan. Most foreigners clumsily trip over their conversational Spanish in a complex seafood ordering scenarios, the Catalans speak, and they understand Spanish perfectly, but they will rarely use it, to preserve their language and maintain its dignity. Especially so in the Ebro Delta, the last enclave of Catalonia. Just 5 Kilometers away from the provincial border of Valencia. I pay up for my prawns and head for a quiet corner of the market to admire Oysters as big as house bricks and shiny jet-black mussels. A fishmonger sits on a worn garden chair, pivoting back on two legs, he looks me with a happy, alcohol-induced grin, wearing an apron liberally smeared with fish guts. He sucks on a bottle of Vol-Damm beer and not the first one of the day judging by his blushed face and the bottles lined up on the floor. He catches me looking over the Mussels on display, and he hisses to get my attention. He motions out the doors towards Alfacs bay with a fish gut smeared hand, “If you look out there.” he says slurring slightly, “You can see the Mussel farms in the distance.” Just offshore in the shallow waters of the bay, row upon row of wooden trellises with ropes covered in clinging mussels are being removed by men in boats. The Mussel farms can be seen at night glittering in the bay, like landing strips in the water.

When it comes to maintaining the local fishing industry, healthy respect is given to Alfacs bay. Fish and seafood stocks are carefully monitored, controlled and nurtured to support their sustainability, ecologically sticking to seasonal seafood catches enables the fisherman of the bay to diversify their target species and distribute fishing impact more evenly across the underlying marine ecosystem. This, in turn, creates jobs for the local population and provides a continuous food source for the markets of the Ebro Delta.

When it’s time for lunch, I fry off the langoustines with garlic and a pinch of smoked salt and stream the mussels with lemon and a bay leaf. I sit down on my apartment balcony with a glass of ice-cold white wine from the local vineyards in Terra Alta and watch the ever-decreasing parade of boats shuttle in and out of the docks unloading their bounty while the last of the pre-lunch buyers with trolley bags leave. The market lulls into stillness, and the weary giant put its head down for a nap.

BIO: After studying at the London School of Journalism, Anthony Bain has spent the last 18 years living in Barcelona, sharing his writing about the city for such publications as The Barcelona Metropolitan. He has also published short stories for Wanderlust Journal anthology and Ky Story. His first travel book “Wanderings Along the Camino” is available on Amazon.