Hot wind blows through the palms as we deplane on the tarmac at Kilimanjaro Airport. I recognize the dark, lantana-framed building from family photo albums. Miles of land stretch beyond the runway, where farmers tend herds of thin, sagging cattle. Our hosts, Debs and Thiemo, meet us in the parking lot with their big rig, which they have retrofitted with canvas flaps for window covers, affording passengers a 360˚ view and much-needed ventilation. We hoist our backpacks and ourselves into the back of the growling truck. The rig skirts the north towards Arusha, where it draws attention from schoolchildren dressed in colorful uniforms, who cheer at us and chase after the vehicle. Our hair whips our eyes. Motorists beep and yell out their windows, miming high fives. Some gesture otherwise.

We arrive at the Meserani Snake Park camping ground, about 15 miles west of Arusha, an hour later. “Have to get some nourishment in you before you crash,” says Debs, revealing a winsome Australian accent as she ladles steaming orange soup into tin cups. Thiemo set up tents and sleeping pads before we arrived, a mercy he offers as a courtesy for the jet-lagged, but from this point forward, we are responsible for pitching our own tents. Heads drooping, we half-fall asleep over our soup before tumbling into sleeping bags. We have been in flight for 22 hours and in transit from Salt Lake for two days.

My interest in Tanzania differs from the high school students I’m traveling with because it’s been 40 years in the making. Tanzania starred in my family’s history for as long as I can remember, wild and full of adventure like a golden, swashbuckling great uncle. My grandparents lived and worked in Tanzania for the majority of my grandfather’s medical and missionary career. My father and his siblings were born there. Dad would later return to teach anthropology in Morogoro, where I was born. Though I grew up in the US, I always dreamed about experiencing the place I revered like a treasured member of the extended family, a feeling that intensified after the deaths of my parents. When the opportunity to visit arose through the school where I worked, I begged to go, no matter the cost or the company. 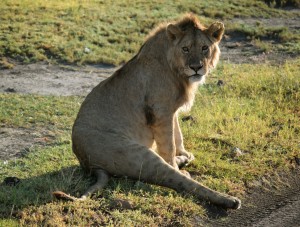 When I wake up a few hours later, Meserani thrums with sound. Motorbikes whir nasally on the nearby highway throughout the night; herds of goats, cows, and camels chatter and bleat; birds chirp and coo in the trees, underscored by the grating call of guinea fowl that inhabit the grounds. Late summer thunderstorms rumble over us. Damp air filters through the rain flaps as staccato drops bounce off the tents and onto the grass. Bass thumps from the park bar; the party there is still going strong at 2 a.m. At dawn, a muezzin calls worshippers to pray.

I soon learn a root lesson: No complaining. I’m not accustomed to sleeping in tents for extended periods of time; I don’t find living out of a backpack glamorous, rustic, hip, or especially fun, nor do the teenagers adjacent to me. Some of the tents have taken on water in the night; their occupants emerge into the morning sun, grumbling and slightly soggy. Thiemo, whose t-shirt reads Drink ‘til she’s pretty, suppresses a sideways grin and raises his coffee mug, encouraging them to move their tents if so inclined.

A rotating group of Maasai tour us around the outlying villages, through enclaves, or kraals, of circular structures with thatched roofs and walls made of mud, ash, and dung, which commonly house a family, their cook space and/or kerosene, and young livestock. Acrid smoke pours from open doorways. The guides wear repurposed tires for sandals – a resourceful all-terrain solution against the elements, particularly the blistering heat, which sears the skin even in early morning hours and conspires with our anti-malarial medications to render us tender and pink. At the Maasai Cultural Museum, Ollie, whose beaded braids fringe his nose, smooths his red shuka as he explains the nuances of Maasai social structure, such as the status conferred by herd size and the rite of circumcision that enables boys to wear the colorful robes signifying adulthood. “Girls are circumcised, too,” he adds, eliciting groans from his squirming audience. Over the years, I’ve absorbed all manner of African lore, now committed to posterity in family memoirs – medicine men and witch doctors, Lion Men, Mau Mau rebels, animal attacks – but still I pull the hem of my shorts towards my knees.

Back at camp, Debs stands under the “kitchen” canopy next to Lati, a shy cook who stares at my shoes and passes me food with a nod and a quiet, “Please.” Lati hunches over an enormous dented stockpot, churning maize flour, water, and salt into a putty-like paste with a long-handled wooden spoon. Debs is a flurry of movement around him, setting out plates and utensils, filling buckets with soapy water, her brown ponytail scissoring the air. She tells the group all about ugali, demonstrating: “You roll it into a ball, then mash a dent in it and scoop up your food.” On the coast, locals eat ugali with coconut milk and spices, influences retained from historical trade routes; inland, it’s eaten with tomato-based sauces. Warm and filling, the staple is enjoyed with mboga mboga (vegetables) or on its own. “If you haven’t had ugali today,” she says, smacking her hands together, “you haven’t eaten!”

As the days pass, I learn to look up, literally and metaphorically. Shifting my gaze alleviates the otherness I feel as the oldest traveler in my group. I become enchanted with the lovebirds at Meserani, who build their homes in the safety of wooden huts, and spend a disproportionate amount of time photographing them, glad for a distraction from sunburned skin and teenage melodrama. Twin girls, the daughters of a friend and colleague, argue and tearfully beg to return home. One of the students has contracted a stomach bug and shit all over the women’s bathroom floor. The 30-something hipster chaperone hits on our dimpled, curly-haired educational liaison, who is barely out of college. Keeping to the group’s periphery, I discover hornbills and hanging nests above bougainvillea-lined walls. I point to a white bird with a curved orange beak: “What’s that bird, Debs?” Her shining blue eyes follow my finger. “I dunno… I think it’s a go-away bird,” she says, laughing. I don’t consider myself a birder, but it is not lost on me that the universe is sharing so many beautiful things that take flight. Frequenting the bar at night gives me wings, too.

Our second week urges us out of the park. We pack our already-spare supplies into still more restrictive daypacks, readying for three days of safari. Driving further inland to Mto wa Mbu, the entry point to the Ngorongoro Crater and Serengeti National Park, Debs stops to barter for bananas and passionfruit from vendors selling produce along the roads.

After a night’s rest at Twiga camp, the group separates into smaller rovers and drives along the crater’s rim, overlooking what the Maasai termed the “big hole.” From the rim’s edge, we watch thousands of animals roam the valley below. I think of my father, who wrote about climbing the rift wall “many times over the years, first as children and later as adults.” He viewed the crater as a “special place, part of [his] secret, psychic African heritage.” The wild, ranging spaces of his Tanzanian childhood eventually led him to settle in Utah’s Wasatch front. Seeing the lush rounded hills surrounding the crater firsthand helps me understand my father’s lifelong affinity, both for east Africa and Utah. We idle the rover to watch undulous towers of giraffes amble among acacia trees, foraging. I am not sure whether it is the giraffes, the heat, the fluctuating elevation, or the memories of my dad, but I feel light-headed and buoyant. I am developing a girl crush on Debs, who teaches me the names of hooch kept behind the counter at gift shops.

Past the crater, the rover descends into miles of flat, uninterrupted horizon. Nothing prepares me for the vast entrance to Serengeti National Park: tall, yellowing grass rustles in every direction as far as the eye can see, the Maasai’s “endless plain.” At the driver’s urging, we pop open the top of the rover, giving us shade from the relentless sun and access to a welcome breeze. Driving towards our campsite at Seronera, roughly midway in the park, Debs points to a hyrax – my grandfather called them “rock rabbits” – atop a cluster of boulders. Wind whistles through the car. Standing in sock feet on the seats, our bodies pliant and bouncing with the ruts in the road, we watch the late afternoon sun cast rosy golden hues in an all-too-short magic hour. Zebras and wildebeests flank the road in the dusky haze. As the long Equatorial night descends, Debs shares her belief that wildebeests represent the highest possible state of reincarnation, painting Thiemo, her long-time partner – Puckish, forthright, and opinionated, with long, gnarly hair – in new light. I fall asleep wondering if I agree.

What puddling tents? What annoying guinea fowl? The Serengeti frees my mind of concern.

At sunrise, elephant families wander languidly through the dewy landscape. We follow a bull, who steps in front of the vehicle and “leads.” He is taller than the rover and close enough to touch. We drop into our seats, silent, when he turns his eyes our way. Progressing through the tall grasses, distant whooping alerts us to a standoff between lionesses and hyenas. Herds of purple-grey hippos laze in recently formed ponds, under treetops lined with storks.

We return to the crater’s rim for the last night of safari. The amethyst sky explodes in milky, dizzying constellations. Several of us stop in our tracks along the dirt path, gawking, our headlamps narrowly preventing collisions in the dark. Baboons we cannot see scurry through the grass. Hyenas bark to one another and lightning flashes in the distance.

In the morning, fingers of fog mute the sunrise. A fat lion materializes in the roadside grass like a gift: hind leg outstretched, passively tracking the rover as we inch by. Flies dot the fur between its luminous amber eyes. Something in its stare reminds me of my grandfather, who experienced explosively vivid dreams and whose mind continued to adventure well after his thirty-year African tenure. As a child, I felt connected to my grandfather by our shared tendency to dream in wild, riotous detail. Facing the lion, my brain flickering between fear and wonder, I confront my naivety. Two weeks is nowhere near enough time to unpack three generations of history. I breathe in the morning air and try to catalyze my disappointment into gratitude with each new breath: asante, asante sana.  Hemingway once wrote: “I could not believe we had suddenly come to any such wonderful country. It was a country to wake from, happy to have had the dream.” As we leave the green passageways of the Serengeti, I silently pray to dream of Tanzania once more.

BIO: Julia Moris-Hartley earned her MFA in Creative Nonfiction from the University of Arizona. Her work has been published by The Bellingham Review and Outrider Press. She is the author of Wax Onion – The Artwork of Sean Diediker. She will never travel with other people’s teenage offspring again.