Travel Essay:  In the summer of 1903, after taking his exam in historical law at Prague’s Charles University, twenty-year-old Franz Kafka traveled to Weisser Hirsch (White Hart) near Dresden to decompress at The Lahmann Sanatorium—a health spa founded by naturopath physician Heinrich Lahmann. Kafka became a natural health enthusiast early in life and at twenty—when he was still an aspiring author—was already an avid swimmer, rower, and walker. He was also familiar with the health-spa culture of his time. You didn’t have to be sick to stay at a spa / sanatorium. Anyone who could afford to escape the travails of everyday life, could relax, unwind, and undergo cures at one of the fashionable spas of Central Europe. Kafka’s parents were regular guests at Franzensbad, and also visited Karlsbad and Marienbad—the triangle of popular West Bohemian luxury treatment resorts. 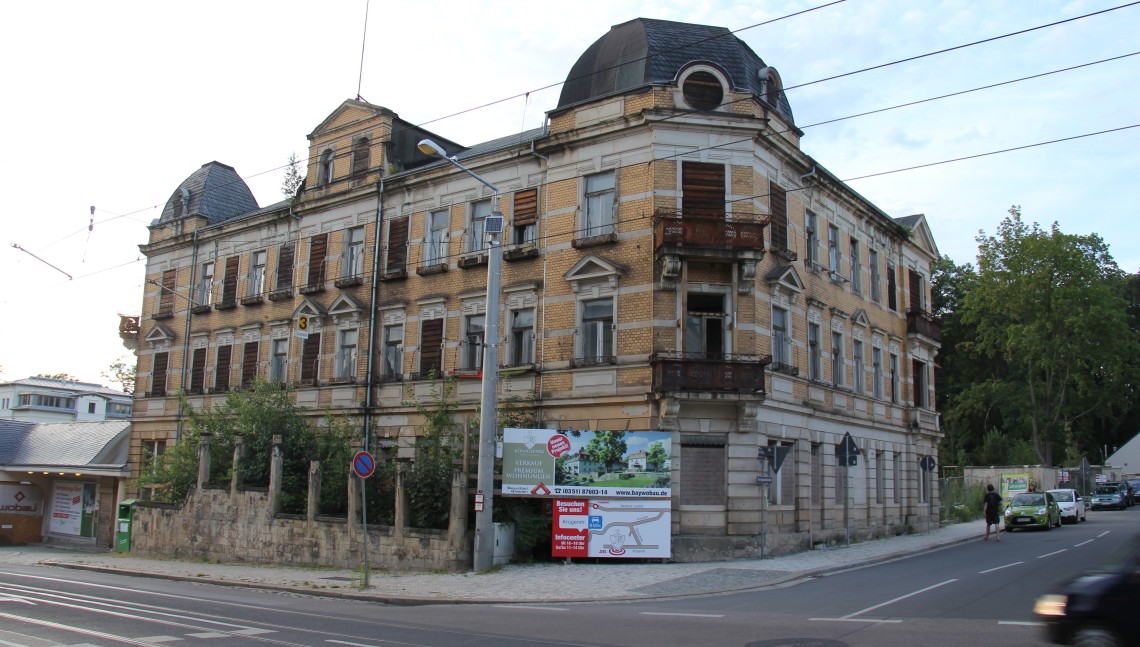 But The Lahmann Sanatorium was farther afield—in Germany—and Kafka, highly motivated to get away from Prague and its environs, convinced his parents that after completing his rigorous exam schedule, was entitled to rest and medical attention at the renown Weisser Hirsch clinic. Dr. Lahmann’s naturopathy was state-of-the-art. He offered a regimen called “Physiatrics” that included hydrotherapy, “air baths” in specially designed “air huts,” mud pack purges, inhalations, UV light and electrotherapeutic treatments. There was a social aspect to the Lahmann regimen too: patients met every morning for light gymnastic exercise, team sports were advocated, and nutritional meals taken together. The sanatorium was expensive, however, more than a civil-servant lawyer would have been able to afford, and Franz was still only a law student, so his parents—owners of a prosperous fancy goods business—would have covered the cost of their son’s pricey, near two-week stay.

My husband and I took the fifteen-minute drive from our hotel on Neumarkt Square in central Dresden out to Weisser Hirsch—now a suburb of the city—in July, 2016. I, especially, was interested to see what remained of the sanatorium that had had its heyday before World War One and had made such an impression on young Franz that he brought home with him a set of unconventional, family-distressing practices. After his stay at The Lahmann Sanatorium, he began sleeping on hard surfaces and performing calisthenics with the windows open, even in the cold, introduced new eating habits, including ‘Fletcherizing’—a practice of chewing each bite of food until it became a liquefied mass. The latter practice irritated his father in particular, to no end. Kafka retained a lifelong ‘holistic’ approach to health, though he later disavowed what he came to regard as the oppressive rigidity of sanatorium culture.

We were astonished by what we found of the former sanatorium. The site itself, renamed   Dr. Lahmann Park—is huge: 36,000 square meters, and since 2011, under renovation by the developer Baywobau on its way to becoming a neighborhood of luxury condominiums. We arrived at a deserted, partially renovated site—stacks of building material, but no cranes or heavy machinery, and no workers. We entered the silent site from an opening on a side street, Stechgrundstrasse, and surreptitiously explored—photographing the ruins and erstwhile restoration stage. It wouldn’t remain this way for long and our photographs would mark a moment in time: the partly restored “Docktorhaus,” Hirschhaus,” and “Natura Sanat,” and the many ravaged rooms, halls, walls, windows, doors and corridors, staircases, nooks, panels, frames and grilles—still standing derelict. The experience was a strange trespass into a lost past: eerie, doleful and remotely composed.

Recently I read online that the Lahmann site had housed a hospital administered by the Soviet Army, from 1946 – 1992, which might explain why we found Russian books in a few of the ruined rooms. That had been a puzzle. I’d wanted to take something of our exploration home with me, as a keepsake, and considered taking one of the books, or else an old metal electrical box that I’d photographed hanging askew in a brick niche. I decided that photos would be keepsake enough. As for Kafka, not a trace of the man remained. I hadn’t really expected it would.

BIO: Elana Wolff is a Toronto-based writer of poetry and creative nonfiction. Her work has appeared in Canadian and international publications and has garnered awards. Her most recent Kafka-quest pieces appear in Humber Literary Review, Cargo Literary Review, and Nashwaak Review. “Kafka-in-Between” was published in Wanderlust Journal on March 8, 2018.

If you can, please consider donating to this all volunteer online journal.