The fifteen horses living in the Ross Nye Stables at 8 Bathurst Mews have a pretty good gig, for farm animals living in central London. Mostly, they lounge in deeply bedded straight stalls and nibble hay; once or twice daily, they carry guests on an hour’s stroll around the five miles of carriage road in adjacent Hyde Park. And every August, when summer crowds smother the lawns in picnic blankets, the entire herd goes on a month-long holiday to Longfrey Farm in Guildford, about an hour outside of the city.

“We could make so much money then, because that’s when all the people are here, but it’s so busy and too hot, and we’re just not going to do that, you know?” explains Bobby the guide. A lifelong Londoner, he has been leading rides for three years and is prepared to narrate for his guests on whatever local lore they are interested in. Description of statuary? Not a problem. Summary of local history? He’s got that covered, too. But when it comes to actually visiting any of the usual tourist haunts, Bobby draws the line.

“I keep saving them for when I have a friend come to visit,” says Bobby, pushing his wire framed glasses up his nose. “But we just end up at the pub instead.”

London, with its nine million residents, double-decker busses and whizzing taxis, may seem like the last place where you would expect to find a thriving livery yard. The human residents of Bathurst Mews are largely middle aged, highly educated and financially successful, and according to census data, more than half were born outside of England. Australian emigre Ross Nye purchased an existing riding school in this area in the early ’60s; formerly a cattle station owner, he believes in the importance of having a connection with nature and animals. Nye’s enthusiasm and love for horses inspired thousands of London’s citizens to give riding a try. Ross Nye Stables, one of two remaining working mews stables in London, are his legacy.

Nye has retired to the country, leaving his daughter Kirsty Anthony to maintain a 55 year tradition of offering guided rides and lessons for locals. She still lives over the mews in a crowded flat with three russet colored golden retrievers and a black cat; every inch of wall and countertop is covered in animal photos. Most stables on this street have been converted to flats selling for £4 million. Garages housing luxury cars used to shelter taxi horses.

“Things have just changed so fast here,” says Kirsty. Once upon a time, she competed in horse shows outside of the city, doing all of her horse’s conditioning within the park. She still rides, though today she is more likely to be teaching members of the Hyde Park Branch of the British Pony Club how to groom and tack their ponies.

Liability concerns have made hands on horse experience hard to come by, even outside of London. In 2009, the Elvaston Mews Stables in nearby Knightsbridge closed after 170 years, citing spiraling insurance costs as one of the principal factors; the British Horse Society blames rising insurance fees for the loss of as many as one hundred stables per year nationwide.

“But we take pride in teaching the children how to do this for themselves,” says Kirsty. “We have always had an emphasis on safety.”

Instructors teach lessons in one of two riding arenas in Hyde Park or out on its trails. There are plenty of distractions. This popular 350 acre park hosts dog walkers and bicyclists, families pushing strollers, thousands of tourists and an unknown number of green parakeets that visitors feed out of hand. Once a private hunting preserve for Henry VIII (he is the one who kept chopping his wives’ heads off, if you are keeping score), no new permanent structures are allowed.

A popular place for the Ross Nye horses to get in a canter is Rotten Row, a nearly 5,000’ long dirt track connecting St. James’s Palace to Kensington (the name is an Anglicized version of the French Route du Roi, or “King’s Road”). It was a fashionable place for tony Londoners to ride when it became a public bridleway in the 1730’s, and remained so for nearly two centuries. By 1900, some 300,000 horses kept London’s commerce and transit lines in motion. But their heyday was cut short by Britain’s 1914 entry into World War I (horses were conscripted into service) and the introduction of motorized transport. Today, some 400 former London mews, immediately recognizable by their narrow lanes and cobbled streets, provide unique housing opportunities in some of the poshest neighborhoods of London.

Several riders “pony” unmounted animals from horseback past Bathurst Mews homes along a cobblestoned alley; one rider is also leading one of Kirsty’s dogs. There is not enough business right now to keep all the horses exercised, so these supervised walks have to suffice instead. Bobby dismounts to unload groceries from an elderly resident’s electric scooter; staying friendly with the neighbors is an essential part of daily life here in the Mews. These flats have interiors graced with pristine white furniture, fine art and genteel appointments, and outside, carefully tended potted shrubs and ornamental plants in windows that horses like to nibble on. Bobby believes that the neighbors knew what they signed up for when they purchased a flat near the stables, and that the business’ longevity will protect it from any objections to the usual horse smells, droppings or nipped home decor.

“If it wasn’t for my father there would be no riding in London,” says Kirsty. “He always believed you needed a vision. This was his.”

Across town from Hyde Park, on the west end of London in the borough of Hammersmith, sits a 200 acre park called Wormwood Scrubs. It used to be a training base for military horses and a proving ground for leisure animals the gentry wished to bring to Rotten Rowe. “The Scrubs” is adjacent to the Hammersmith Hospital and the HM Prison Wormwood Scrubs, formerly home to Charles Bronson, dubbed the “most violent prisoner in Britain” by members of the press.

Nestled on the Scrub’s edge, tucked in between a BMX park, football fields and the Kensington Aldridge Academy (the entire school is built of Portakabin temporary structures) is the Wormwood Scrubs Pony Centre. Since 1989, thousands of children have participated in their nationally certified Riding for the Disabled programming. It is an enclave of rural life deep in this urban center, and its 22 equine residents work daily to fulfill its mission: increasing the quality of life for urban youth.

But founder and CEO Sister Mary Joy Langdon considers the center’s success to be nothing short of a miracle, strong words for a Roman Catholic nun. Starting with three ponies of questionable origin and a muddy field, the Centre grew piece by piece. The land is leased, the original stables and fencing were built by volunteers, and in 1994 an indoor riding arena was erected in just 72 hours using donated materials and labor, thanks to the BBC reality show Challenge Anneka.

“When I think back to all the difficulties in the early years, nobody in their right mind would have taken that on,” says Langdon.

Despite the joy horses have always brought her—“I don’t think you can ever have enough of horses,” says Langdon—she felt her life had a higher calling. As a young adult, she gave up equestrian pursuits, took her vows and for five years devoted herself wholly to religious life.

But then Langdon agreed to participate in a charity horse race in Ireland; the entire process was filmed by the BBC, and her participation attracted the attention of the owners of a small livery yard looking for new leadership. She wasn’t interested, but the owners persisted.

“I didn’t join my congregation to go back into horses,” says Langdon, “but my Provincial told me that I could use my gifts with horses to help the children. It was because of her enthusiasm that the Pony Centre came to fruition.”

The Centre is in White City, a residential district the local MP has described as one of the poorest areas in this section of London. There is currently a proposal to construct a 40,000 seat football stadium in the Centre’s backyard, a development Langdon describes as “inconvenient”. The facility itself sits behind a ten-foot high metal fence ringed with barbed wire.

“For a city, London has lots of parks but some children are still so completely urbanized, and their parents aren’t interested,” says Langdon. “They are deprived of getting their hands dirty, of smelling fresh grass and sweet hay. This place is a rural oasis where children can be children.”

Schools send children to the Pony Centre who need to heal from trauma and other challenges. Through equine interactions, children gain confidence and self-belief; they learn to trust. The majority of Pony Centre participants are living with physical disability or illness, or sensory differences like autism, and participate in mounted activities. The horse gives these riders the power of physical freedom. Two legs become four; two hearts become one.

Three boys bump into each other on the porch outside the window. They were not scheduled to work today, but here they are anyway. “I taught Bobby to ride, you know,” says Langdon, referring to Bobby-the-guide from Ross Nye. She smiles.

“We might just be a little Pony Centre, and we can’t touch everyone,” says Langdon. “But something is good, isn’t it?” 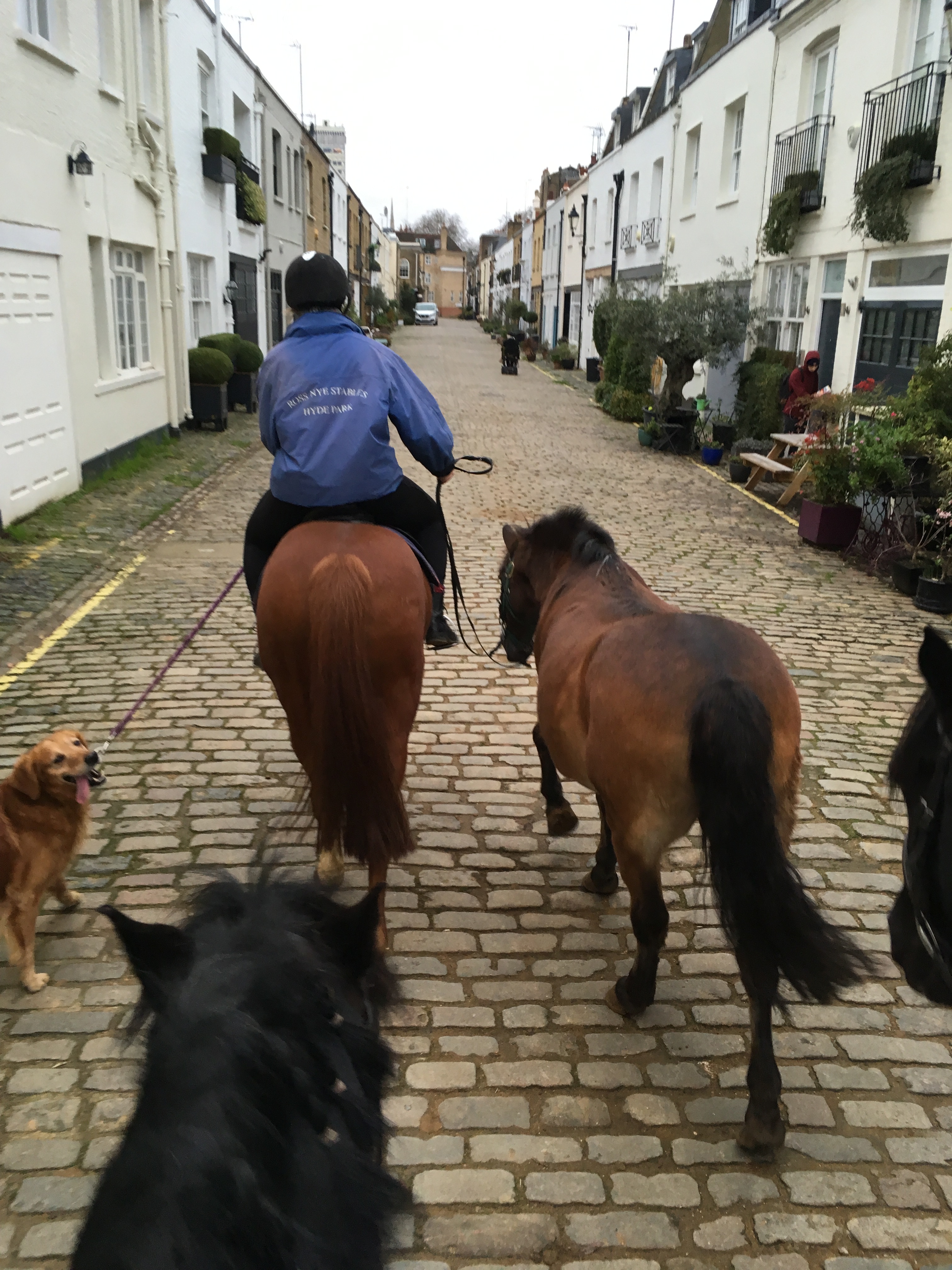 BIO: Christina Keim is a self-diagnosed equine addict who enjoys writing primarily about horses and horse people. Her equine-themed work has appeared in a wide variety of print and digital media. As an M.F.A. student she is valiantly trying to write about something besides horses, so far without success. 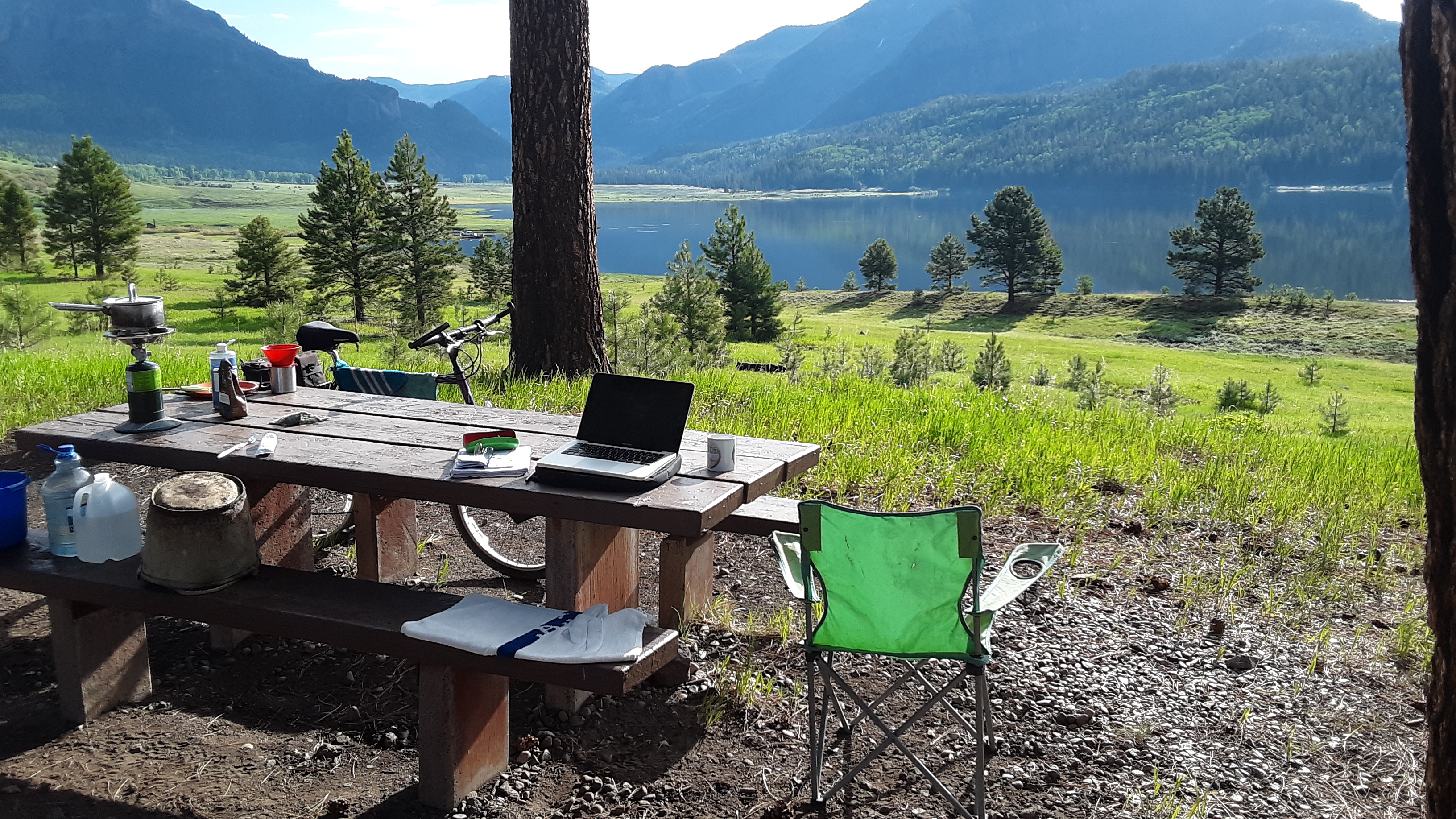 If you like what you're finding here, please consider making a donation. We are committed to remaining free of adverts and junk from Google! Thank you.