An Essay on Home

Maybe thirty metres down from the gravel shoulder where your cousin Manuel transcribed an arc with his bristled arm and said in brisk Portuguese what was your land and what was not, you take a hard turn into the bush. What your metropolitan eyes took for a path turns out to be a track carved by the bodies of wild boar, or perhaps the feral cattle that too belong to you in theory. You fight through clumps of yellow lupin and rock-rose until a clearing opens up in the scrub and a dome of azulejo mountain sky unfurls above you. The sun dipped behind the horizon half an hour ago, but the last coals of sunset still smolder in the petals of the lavender. The call of the hoopoe and the electric hum of the katydid ring against the far mountains. Even the grass snaps underfoot, so parched the thought of fire seems spark enough. And your cork oaks, their grey skin ridged with sadness, cup the whole glade in their tangled fingers. Later, you realize that you have stood so long with these trees that mosquitos have their faces in your veins and you don’t care.You’ve never felt less human than you do now, arms outstretched, legs planted like saplings in your ancestral dirt.

What in this environment has resonated in your denatured soul? Why does this Portuguese meadowland you barely know enfold you while the Canadian wild, with its charms and terrors, never has? On your mother’s side, you are immigrants. Your grandparents fled Salazar in the sixties and for three generations, Canada has meant concrete, skyscraper, and bus. Your father traces his family back to those mysterious ‘Old Stock Canadians’ our former Prime Minister so loved, but despite offshoots in Cape Breton, Saint John’s, Saskatchewan, nowhere is home. Perhaps this landlessness defines the settler experience. To put it more kindly than truly, every plot a European occupies is ‘borrowed.’ Could your new joy in this old country be a repatriation?

But you forget your mission here, a sting out of a corporate espionage thriller, only slow and Portuguese. Your grandfather noticed discrepancies in the cork yields of his two properties. Convinced he was being cheated, he sent his immediate offspring to validate his claim. Earlier, while Manuel—your cousin, your family’s executor in the cork business, the smallest man you’ve ever seen—explains the lack of yield, you strain to follow his mumble-mouthed Portuguese. Still, you drop quotes about harvest periods and virgin product, and smile as Manuel sucks in air through his teeth. He didn’t expect you to understand anything.

Cork cultivation diverges from mainstream forestry in that the trees never fall. Instead, the timbermen, called tiradors,target living bark, a light, porous substance used most notably as a sophisticated stopper that allows wine to breathe and mature. The tiradorswork in pairs, one crooked in the branches, the other on the ground. Each blow of their steelhead axe must strike with perfect force—too much, and it may split the tender phellogen. Too little and it won’t penetrate the tough outer layer. Once a sheet is squared, the tirador wedges his axe-handle into the ‘ruler,’ or vertical cut, and pries the bark off with a sticky crack. The tree, now nude, flashes orange and angry, but in a few months its hide will thicken again. Since the whimsical branch patterns of the cork oak resist mechanization, fathers have entrusted the same crown cuts, necklace cuts, and rulers to their sons for three centuries.

Manuel certainly looks like a peasant out of another age, all isolation and sunburn and outhouse, but his explanation for the low yields smacks of the academy. Climate change bakes the dirt, and without subsistence farmers around to plant nitrogen fixers like favas among the roots, the cork oak can’t absorb its nutrients. And, he says, there are no more young men to clear the land.

Ah, you say to your mother. Your grandfather had sent money to buy into a government work program for this purpose. Manuel claims the paperwork got lost, but you smell a rat. The program also surveys the borders, and you suspect Manuel had moved a handful of property markers. It’s a bold trade on his part. Every few years, one had to stamp out infestations of rock-rose or compromise the crop. These shrubby flowers’ tissue-paper petals in pink and white conceal the brutality of their underground advance. They have an alliance with trufflesthat twist their hairy mycelium around the rock-rose’s extensive roots. These fungi burn the soil with toxins that kill any nearby plant, so the rock-rose has the lebensraumto drop their hard pointed seeds. As this brush spreads, it chokes the cork oaks and leads to bad stock. With nobody to keep it in check… Manuel shakes his head. Soon, he says, it’s finished.

Your average Canadian could not tell a maintained orchard from a feral one. No rigid lines of fruit-trees here; cork oaks spot over their meadows in random clumps. Animals both wild and domesticated graze on the grass and the acorns sprinkled beneath their canopies. This ecosystem, called the montado,is a created wilderness organized for the nourishment and aesthetic pleasure of its human users. It also supports a delicate spread of animal and plant residents. Consider Linaria ricardoi, an elegant purple toadflax with medicinal properties. It relies on low-intensity farming and control of shrub encroachment to find purchase in the nutrient-poor soil. As former farmers flocked to cities, Linaria ricardoi’s niche shrunk. It survives in a handful of populations around the city of Beja, including the glade you stand in. You register the hummingbird-shaped flowers only as dots of amethyst that hover by your feet. Close your eyes and you forget them. Soon, the world will too. Their loss heralds others. The montadoand the similar Spanish dehesa provide the last asylum for the Iberian Lynx and the Spanish Imperial Eagle, apex predators whose disappearance would further fragment the food chain. In the montado, humans act as a tentpole species that shelters biodiversity rather than curtails it.

Oddly enough, in the town where you have lived your entire life, on the obverse hemisphere, much the same type of human-nature interface existed for thousands of years. The Lekwungen and SENĆOŦEN speaking-peoples that hold deep claim to the island of your shallow roots monitored the indigenous Gary Oak meadow in much the same way the tiradors monitor the montado.In order to facilitate the growth of camas, a staple food, these peoples initiated campaigns of annual controlled burns and ritual husbandry. Just as in Portugal, this traditional knowledge has been eroded by the blast of modernity. Today, the Gary Oak meadow occupies only three percent of its former realms. Why, then, do you not feel a bond with the soggy oaks on the slopes of WMIEŦEN? Why does this joy live in parched trees you see yearly at most?

You think it comes down to a generational covenant with the land. The bark of the cork oak peels off with such ease as a natural defense against the wildfires that often lacerate the arid Portuguese meadows. Should the outer layer of bark burn, it drops off like the skin of a snake, and the tree underneath survives. Therefore, to shell the tree demands that humans becomethe shell to replace it. It’s a feudal pact: we get cork, and in turn protect against brush and brushfire. Abandoning this arrangement has fatal effects. In 2017, fires savaged Portugal, fueled by the masses of scrub that characterize untended orchards and the orderly rows of flammable Australian Eucalyptus planted for pulpwood by commercial timberers. In five months, over one hundred people burned or suffocated to death. Acres of farmland flaked away on the hot wind. Maybe this is your role here—unclog the montado and relink those chains from father to son that cracked generations ago in the shuffle of illegitimacy and immigration.

For a second, you think you have it. The flies, the wild onions, the purple flowers, the cork—they whisper to you. Much like the Portuguese language, you can understand what is being said, but you can’t speak. You can name crown and necklace cuts, but an axe in your hand is a dumb instrument. You know Linaria ricardoiby sight, but not which ailments it can salve. Dutiful you, you will lean on Manuel to get the land cleared, but you’ll suggest your mother turn a blind eye to the rest. You don’t talk montado, and you won’t learn. You have so little claim here.

You left your girlfriend at the rental car with Manuel. They must have cracked up at your desperate jog in no particular direction. You, the Great Indoorsman, in your Keens sandals and your khaki tee, crashing off the path, through a spider web, and out of sight. You laugh, finally, because what else can you do? From his dry cloister in the rock-rose, the hoopoe hoots its displeasure at your interruption. 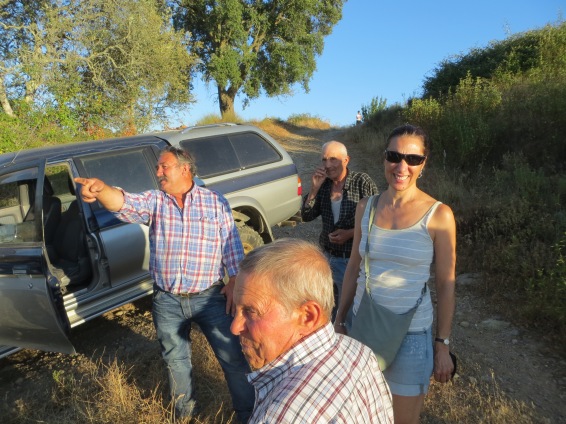 BIO: This essay has previously been published online as the winner of the 2018 On the Verge Writing Contest at the University of Victoria.  Nicholas Guerreiro is a fifth year student in the departments of Theatre and Creative Writing at the University of Victoria. His plays Hidden People and O, Come All Ye Faithful were produced by the Student Alternative Theatre Company. Nicholas also wrote and directed Rural Ravaillac for SKAMpede, and remounted O, Come All Ye Faithful on the Victoria Fringe. Nicholas is the literary manager for small theatre company Vino Buono productions. His stories and poems won every round of the 2015 Times Colonist So You Think You Can Write contest and his essay Vassals of the Land won the 2017 On The Verge writing contest.

If you like what you read on here, please support us with only $1 or $5 per month. Thanks.