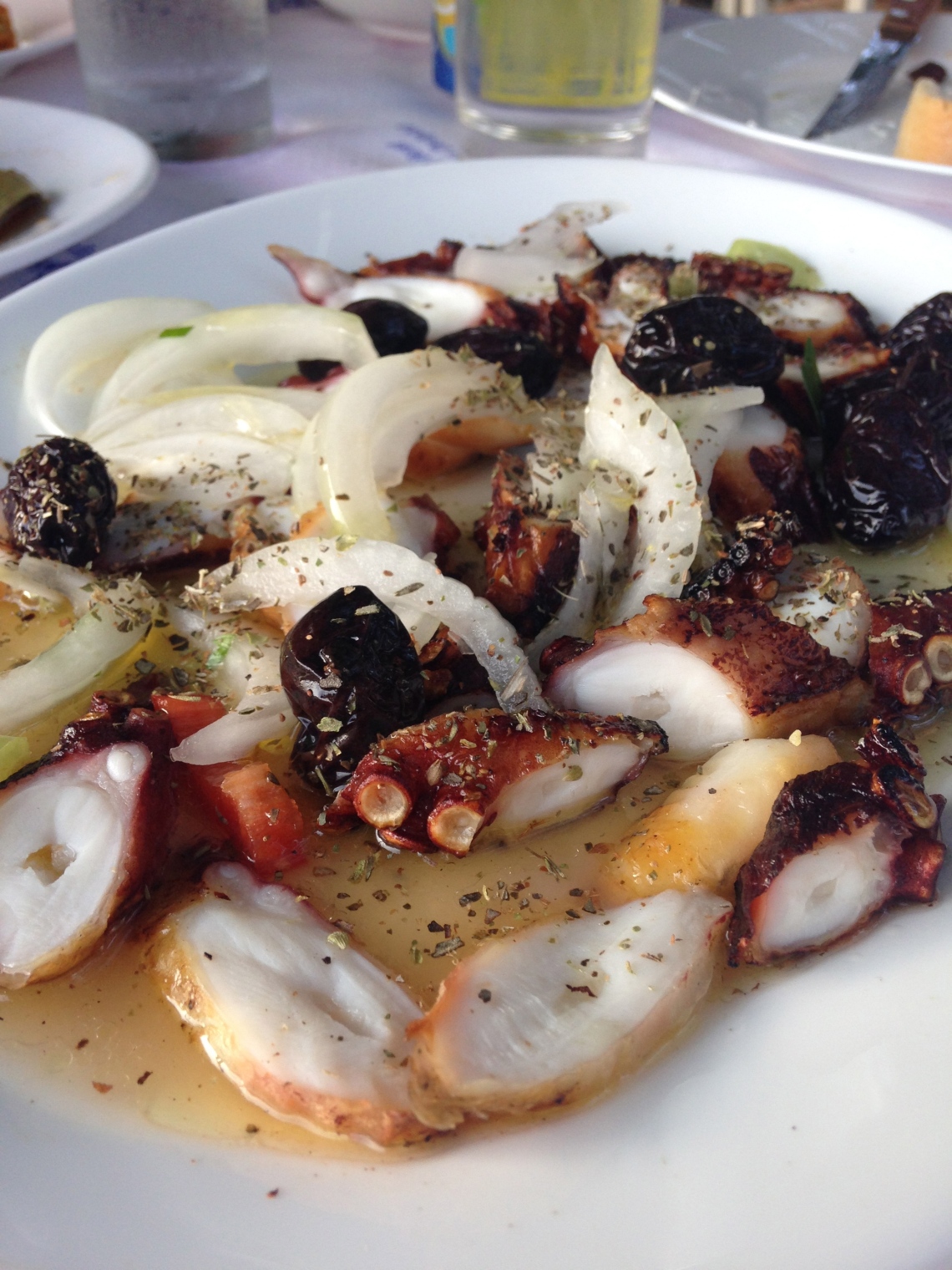 It’s 4 p.m. and I am starving. From the moment I leave the beach, I have fantasies about eating yogurt stored in my hotel fridge. Ascending the mosaic stone steps of Archodissa, the first face I see is Vasilis’. He stands at the top of the stairs, wearing aviator shades, clinking glasses of tsipouro with Tassos. I stop to say Yia sou, ti kanis? and he greets me with a warm smile.
I met Vasilis at Archodissa Restaurant a week before my writing workshop began on Thassos, Greece.  Archodissa is more like an outdoor patio than a restaurant, where olive trees grow through the frescoed stone floor and light dances through the canopy of leaves overhead, clusters of green grapes camouflaged among the vines until July when they ripen into a deep purple. In the distance, the dark blue outline of Mount Athos, an island filled with prayerful monks, stands in contrast to the sunset-filled sky. Archodissa catches visitors with its beauty but keeps them there with its energy. And Tassos Kouzis—the owner, the fisherman, the chef—gives this place light. He is more affectionately known as “Tassos of Thassos.”

Vasilis is one of his best friends. They grew up in a small mountain village together, thirty minutes away. Vasilis’ voice is deep and has a slight rasp, almost as if he needs to clear his throat at all times, but I can always also hear the sound of a smile. I have a hard time understanding his Greek, though—not only because it’s Greek, but also because he eats his words, the end of one blending into the beginning of another. I must tell him, Siga, siga,.
“Do you want to sit for some tsipouro?” he asks me. “It is my recipe. You should try it.”
I look down at myself. I’m wearing a bathing suit cover-up, carrying a damp towel, and feel hardly adequate for public appearances. But I pause before continuing to my room. Tsipouro, a distilled liquor that is so strong even the distillers drink it with a splash of water, is the elixir of life on this island. The first time I tasted tsipouro was similar to the first time I tasted Italian grappa: my tongue went numb, a cascade of fire descended my throat, and I thought demons would spawn inside of me. Now, I’m acquiring a taste for it. The flavor, I learned, is infused with one’s parea, one’s group of friends, and the camaraderie and conversation that are shared along with it. Katse, katse, Vasilis says, pointing to the chair beside him. He pours a small glass of tsipouro, leaving just enough room for a couple of ice cubes and a centimeter of water, and he asks our waiter, Dimitri, for an extra plate. I am introduced to the man sitting across from him at the table, and I am told they have already placed their order.
“Oh, no, I don’t want to intrude,” I say, and start to rise.
“Why will you go?” Vasilis asks, not understanding. “We have food coming.”
I hesitate and he nods to my chair, so I sit back down and sip the firewater. We talk about swimming and fishing, about what I’m doing in Greece and where I’m from.   Then the food arrives. Grilled red peppers stuffed with feta cheese, horiatiki salad with vibrant tomatoes and juicy cucumbers, mussels steamed in a white wine sauce, fresh baked bread sliced thick and warm, giant white beans slow-cooked in a wood oven, beet salad with a side of garlic dipping sauce, warm cheese mixed with spicy peppers, diced eggplant salad: plate after plate of all of my favorite dishes. The tablecloth disappears; I have never seen so much food, not on Thanksgiving or Christmas, and especially not on a typical Wednesday afternoon.
Every time I think we are finished, Dimitri and Tassos bring out another dish. My friends arrive from the beach, pausing at our table. I can see the questions in their eyes–they want to ask who I’m sitting with, do I know these people, but then they see the food and are sidetracked. Some stare. Some laugh. One girl takes a picture. I take a picture.
In total, there are seventeen dishes. Seventeen dishes for three people. There is an octopus caught by Tassos’ spear gun late at night, tenderized by hand against rock, left in the sun to dry, then grilled and sliced with onions and black cured olives; fried zucchini from the garden behind the restaurant, submerged in the olive oil that was pressed from the trees growing through the restaurant’s floor; feta cheese made from Uncle Nikos’ goats, baked in a ceramic pot with hot peppers and herbs plucked from the side of the road, in a wood oven whose temperatures are measured by Tassos’ hand, counting one-Mississippi, two-Mississippi: this is 400 degrees. We are nourished from the inside out.
“You are my heroes,” I tell them.
“This is normal!” Vasilis exclaims, then apologizes for not ordering pork or lamb. “It’s only a light messimeriano. We order fish and vegetables for lunch. Meat is for dinner,” he says sadly.
I’m perfectly content, I try to assure them. “If I had one meal left on earth, this would be it. This would be my last supper.” To this, Vasilis laughs.
When my Greek teacher walks by, we invite her to join us so I won’t have to leave for my lesson. “Mono milate sta ellinka,” she tells the table, asking that everyone only speak in Greek for the next 30 minutes. Tassos occasionally joins us, calling for “Yia mas, guys!” toasting all of our glasses. Soon, conversation switches to nationalism and philosophy, and I am lost in vocabulary. I watch and listen, learning that in Greece it’s not uncommon for friends to speak of politics and the well-being of one’s soul, to speak passionately with raised voices, and then resolve all discussions with laughter and a toast.
To think: I started out wishing for yogurt and was met with a feast; I greeted Vasilis as an almost-stranger and left as a member of his parea. I thank him before I leave but he shakes his head and says, “Thank you, that you join us.”
It never ceases to amaze me how big, and welcoming, the Greek table is.

BIO: Jennifer (Jenny) Currier I earned an MA in Creative Writing from Dartmouth College, and then became a wanderer: I trained dolphins in Hawaii, worked as a waitress in New Zealand, and circumnavigated the world on a global scavenger hunt. You can find my work in Motif Magazine, Vagabond, Newport Life, Cornerstone, and Haunted Water Press. I’m currently writing a book about my Greek experience, and I blog at fushilou.wordpress.com. @fushilou