The first day was dedicated to my dad who died on October 5th 1998. It was beset with blisters as a result of my new boots, and twice I became lost, a record even for me, taking a detour of at least 2.5 hours and 600 metres of strenuous uphill climbing which added to the basic 130 kms of the overall route. The landscape was absolutely beautiful: full of Canterbury bells and Chinese lanterns with golden and tan beech leaves in heaps by the paths. The next day when a monk at the famous Heiligenkreutz Monastery said he was glad for me that I saw the summit, pointing out that much of the way is otherwise by the main road. I too was pleased – with the view as well as the introduction to the mellow Austrian countryside near the mountain of Aninger in the Föhrenberge National Park of Lower Austria.

Lunchtime was enjoyed at a little cafe in Gaaden before I got lost for the second time. Initially I found myself in the middle of a forest: slim, smooth tree trunks of a gentle grey alternating with darker and altogether rougher pine – the Fall was definitely beginning. When I stood still I thought there was absolute silence, something you don’t experience often these days. Then I heard a whisper, or was it a rustle? I couldn’t place it until I had been properly still for quite a while. With very careful attention it became clear – it was the sound of individual leaves kissing the ground, one by one. Surely one of the most magical places I have ever visited, I sat and meditated there with pure pleasure.

Eventually I put my rucksack back on, put one foot in front of another, and before long I had lost the signposts again. It transpires that the Via Sacra is an old way which barely anyone takes these days, not least solo women in Autumn, and so the signposting has not been replaced where it has got broken. In fact, there was a silver lining to my predicament (isn’t there always!) – going off-course again was how I found the monastery at all. But I am jumping ahead. No amount of retracing my footsteps was any good and I have to admit that my spirits plummeted. I stood still again, I turned around, I settled myself and became aware how very tired I was. What to do? It was then that I heard voices and into view came a couple with a large plastic bag – they were foragers on holiday from Vienna and were out collecting wild mushrooms. Happily, they were friendly and offered to take me to the nearest village in their car which was close by. The journey gave us the chance to introduce ourselves and exchange in a mixture of my broken German and their considerably better English.

I was checking my phone for the map of the trail (a pdf which did not have the requisite amount of detail) when I glanced up and saw the magnificent turrets of what looked like a fairy tale castle. I knew it was the Cistercian monastery, the oldest continuously occupied in the world, which I had hoped to discover when I had read about it the previous evening – the most well known in all of Austria – it was a good surprise. After many thanks to my rescuers, I stumbled out, my feet feeling rather sore now, under the archway and across the courtyard to the public reception where there was yet another obstacle to overcome.

I asked for a bed for the night, thinking that my backpack would be enough to ascertain my pilgrim status, but I was wrong. I explained that I had left the capital that morning and was on my way to Mariazell Basilica (the Santiago de Compostella, the Mecca of this country), on foot, alone, and would not make it anywhere else that night. He called someone else and I waited, holding back my exhausted tears. To my delight the monk who arrived was the English speaker of the monastic community and he was a gentleman. He showed me to a plain room – heavenly in its simplicity – and proceeded to leave me. I asked if there were any rules I must observe, having stayed in other such establishments in the past and coming up against many. With a wry face he said, ‘no men in your room’. I opened my mouth to explain, when I saw a twinkle in his eye and knew he was joking!

With a whitewashed wooden exterior and many flags of yellow and red, there is a pool and statuary, arches and sequestered gardens to explore. The only other women I saw were members of a group of dignitaries taking a tour and filling most of the pews in the chapel so that I was consigned to the back that night. The Heiligenkreuz monks are renowned for their Gregorian chanting and I was keen to attend their religious services even though I am not a Christian, just to hear them sing. Dressed in their white robes, half on one side and half on the other of the wooden and highly decorated choir stalls which were exactly the same colour as the beech leaves in the woods, their sound was both haunting and eerie.

After a period of quietude and a night of restful sleep, I returned to the Via Sacra the next morning. Day one over, tricky tasks overcome, and I was ready for what the pilgrimage would offer next. I was just starting to get into my stride and looking forward to more stunning surroundings and majestic architecture. I did not know what adventures were to follow, but I was certain there would be many. 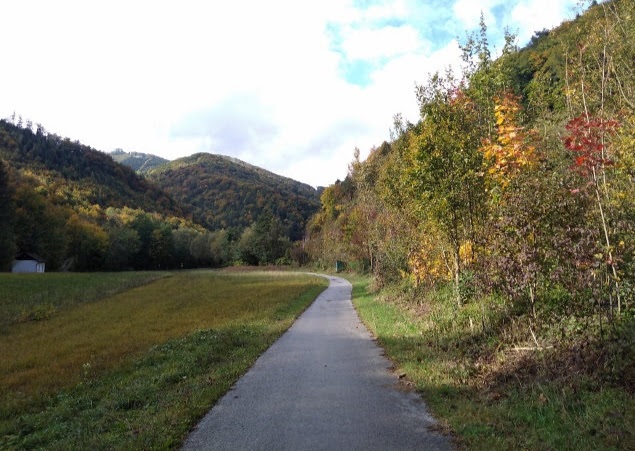 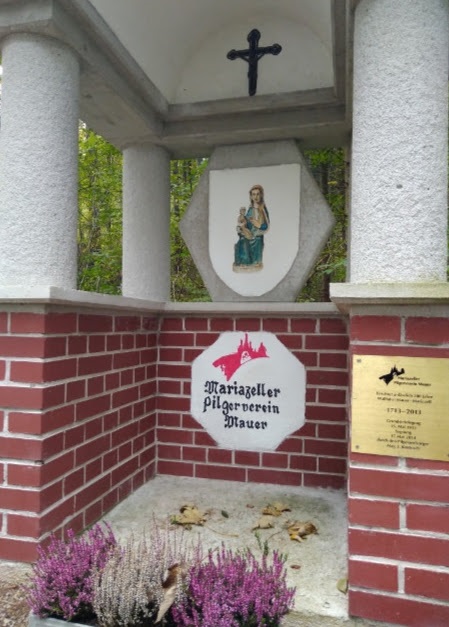 BIO: I walk without a donkey, a solo female pilgrim of 56 years. I am a mother and Shiatsu practitioner living in Edinburgh. In 2016 I made a momentous decision to leave home and seek my fortune. Now a writer, I have a vibrant and joyous life travelling half the year.

You can follow the rest of my Via Sacra pilgrimage from here: https://walkingwithoutadonkey.com/2017/10/14/walking-without-a-donkey-via-sacra-day-2/

If you have travel stories of your own that you’d like to share with our global community, please see the guidelines here: